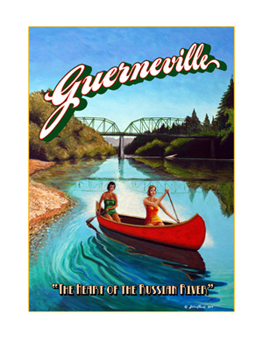 Harken back to a simpler RIVER time.  A Celebration of the Northern California town of Guerneville and the Russian River.

Guerneville (/ˈɡɜːrnvɪl/ GURN-vil, formerly /ˈɡɜːrnivɪl/) is an unincorporated community and census-designated place in the Russian River Valley of Sonoma County, California, United States. The town is historically known for the logging community, formed in the late 1800s. Guerneville is also known for its natural environment, liberal atmosphere, and proximity to wine-tasting and redwood forests. It was founded by the Guerne family in the 1850s.

Guerneville is built adjacent to the Russian River. Redwoods grew in the riverbed with such vigor that just a few centuries ago, the valley had the greatest biomass density on the planet, according to local lore.  The local Pomo Indians used the area as a summer camp and called it "Ceola" (/ˈsiːoʊleɪ/ or cee-oh-lay) which meant "shady place." Except for a large stand of ancient trees preserved in the Fife Creek watershed, now the centerpiece of Armstrong Woods Park, many of the trees were logged in the late 19th century and the early 20th century, giving rise to the first English name for the place – "Stumptown." Logging in the area boomed after vast amounts of lumber were needed for rebuilding after the 1906 earthquake. The annual town parade still commemorates the old place name by calling itself "Stumptown Days." The present name Guerneville was introduced to honor Swiss immigrant George Guerne, a local businessman of the 19th century who owned the town's sawmill. By 1870, there was a U.S. Post Office in Guerneville; it was listed by the name "Guerneville".  Although locals may be found selling T-shirts that say "Don't call it Guerneyville", many have called the town "Guerneyville" in spelling and pronunciation since the 1800s. The extensive redwood forests on the surrounding mountains are less than 200 years old, having been replacement plantings for much of the logging done in the 19th century.

The area became popular with wealthy vacationers from San Francisco and surrounding communities in the late 19th century. The San Francisco and North Pacific Railroad linked the town to the Ferries of San Francisco Bay in 1877. Even with the demise of train service in the late 1930s, the area's resorts remained popular with vacationers who came by automobile through the 1950s. A local movie theater, the River, was built near the beach and showed double features throughout the 1950s and 1960s. The coming of jet airplane travel in the 1960s marked a period of decline for many of the older resorts. Winter floods in 1964 caused a further decline in business conditions. A renaissance took place in the late 1970s as large numbers of gay entrepreneurs from San Francisco identified the area as a prime recreational destination for weekends. Many older resorts benefited from increased tourism, and the town's businesses began to thrive.