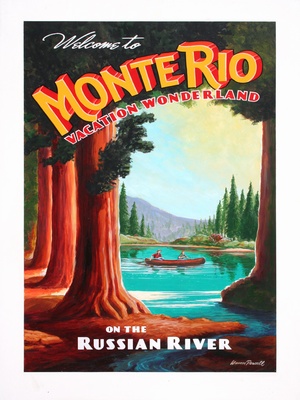 Harken back to a simpler RIVER time.  A Celebration of the Northern California town of Monte Rio and the Russian River.

Monte Rio is a census-designated place (CDP) in Sonoma County, California along the Russian River near the Pacific Ocean. The town of Guerneville lies northeast of Monte Rio, and Jenner is to the west. The population was 1,152 at the 2010 census, up from 1,104 at the 2000 census. Bohemian Grove is located in Monte Rio.

Starting in the 1870s, Monte Rio was a stop on the North Pacific Coast Railroad connecting Cazadero to the Sausalito, California ferry. Redwood lumber from local sawmills was shipped to build San Francisco. After the sawmills left, the area became known as Vacation Wonderland with trains transporting San Franciscans to summer cabins and even a seven story hotel downtown. Portions of the 1942 Academy Award-winning film Holiday Inn were filmed at the Village Inn Resort in Monte Rio. The trains no longer run, and the area now is mainly inhabited by full year residents.

Despite heavy logging during the second half of the 19th century, the Sonoma Lumber Company preserved a 160-acre (65 ha) grove of old-growth redwood trees, which was sold to San Francisco's Bohemian Club in 1899. The club purchased dozens of other parcels in the area, and now owns 2,712 acres (1,098 ha), which it uses for its summer retreats.