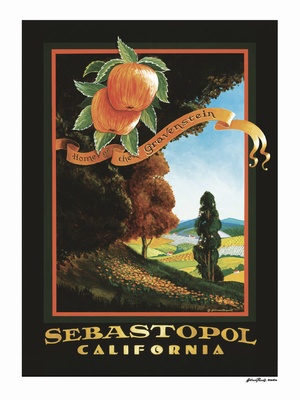 Harken back to a simpler APPLE time.  A Celebration of the Northern California town of Sebastopol and our great tasting Gravenstein Apples.

Sebastopol (/səˈbæstəpoʊl/ or /səˈbæstəpuːl/) is a city in Sonoma County, in California. The population was 7,379 at the 2010 U.S. Census, but its businesses also serve surrounding rural portions of Sonoma County, a region known as West County, which has a population of up to 50,000 residents.

It is about a 20-minute drive from the Pacific Ocean, between Santa Rosa and Bodega Bay, and is known for its liberal politics and small-town charm. It was once primarily a plum- and apple-growing region; wine grapes, however, are now predominant, and nearly all lands once used for orchards are now vineyards. Famous horticulturist Luther Burbank had gardens in this region. The city hosts an annual Apple Blossom Festival[9] and Gravenstein Apple Fair.

Sebastopol became known as the "Gravenstein Apple Capital of the World". The apple industry brought a steady rural prosperity to the town. In 1890 the San Francisco and North Pacific Railroad connected Sebastopol to the national rail network.[12] The town was incorporated in 1902, with schools, churches, hotels, canneries, mills, wineries, and an opera house to its credit. The 1906 earthquake reduced most of these early buildings to rubble (Sebastopol is only seven miles from the city of Santa Rosa, the worst-hit town in the 1906 earthquake), but as elsewhere in the county, the town was rebuilt.