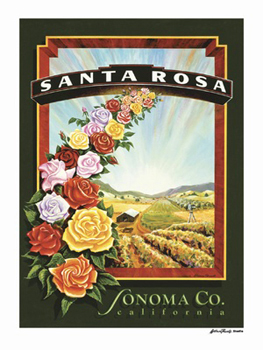 Harken back to a simpler AGRICULTURE time.  A Celebration of the Northern California town of Santa Rosa and the many advances that Luther Burbank made to Agriculture.

Santa Rosa (Spanish for "Saint Rose") is a city in and the county seat of Sonoma County. Its estimated 2018 population was 177,586.  Santa Rosa is the largest city in California's Redwood Empire, Wine Country and the North Bay; the fifth most populous city in the San Francisco Bay Area after San Jose, San Francisco, Oakland, and Fremont; and the 28th most populous city in California.

Santa Rosa was founded in 1833 and named after Saint Rose of Lima. Before the arrival of Europeans, the Santa Rosa Plain was home to a strong and populous tribe of Pomo natives known as the Bitakomtara. The Bitakomtara controlled the area closely, barring passage to others until permission was arranged. Those who entered without permission were subject to harsh penalties. The tribe gathered at ceremonial times on Santa Rosa Creek near present-day Spring Lake Regional Park. Upon the arrival of Europeans, the Pomos were decimated by smallpox brought from Europe. By 1900 the Pomo population had decreased by 95%.

By the 1850s, a Wells Fargo post and general store were established in what is now downtown Santa Rosa. In the mid-1850s, several prominent locals, including Julio Carrillo, son of Maria Carrillo, laid out the grid street pattern for Santa Rosa with a public square in the center, a pattern which largely remains as the street pattern for downtown Santa Rosa to this day, despite changes to the central square, now called Old Courthouse Square.

Beginning on the night of October 8, 2017, five percent of the city's homes were destroyed in the Tubbs Fire, a 45,000-acre wildfire that claimed the lives of at least 19 people in Sonoma County. Named after its origin near Tubbs Lane and Highway 128 in nearby Napa County, the fire became a major section of the most destructive and third deadliest firestorm in California history.[16][17][18] Most homes in the Coffey Park, Larkfield-Wikiup, and Fountain Grove neighborhoods were destroyed.

A notable exception to the destruction in the area was the protection of more than 1000 animals at the renowned Safari West Wildlife Preserve northeast of Santa Rosa. All of the preserve's animals were saved by owner Peter Lang, who, at age 76, single-handedly fought back the flames for more than 10 hours using garden hoses.