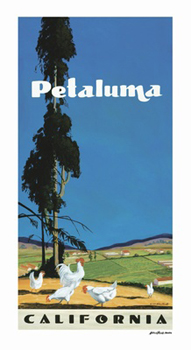 Harken back to a simpler EGG time.  A Celebration of the Northern California town of Petaluma and the birthplace of the commercial Egg industry.

Petaluma /pɛtəˈluːmə/ is a city in Sonoma County, part of the North Bay sub-region of the San Francisco Bay Area, located 37 mi (60 km) north of San Francisco. Its population was 57,941 according to the 2010 Census.

The Rancho Petaluma Adobe, located in Petaluma, is a National Historic Landmark. Its construction started in 1836 by order of General Mariano Guadalupe Vallejo, then Commandant of the San Francisco Presidio. It was the center of a 66,000 acre (270-km²) ranch stretching from Petaluma River to Sonoma Creek. The adobe is considered one of the best preserved buildings of its era in Northern California.

Petaluma is a transliteration of the Coast Miwok phrase péta lúuma which means hill backside.  Péta Lúuma was originally the name of a Miwok village located near the present day borders of the city of Petaluma.

Petaluma has a well-preserved, historic city center[10] which includes many buildings that survived the 1906 San Francisco earthquake.

The Coast Miwok resided in southern Sonoma County, and Péta Lúuma was originally the name of a Miwok village east of the Petaluma River. A number of other Coast Miwok villages were also located in and around what is now Petaluma; Wotoki, immediately to the south of the village of Petaluma, on the opposite side of the river, Etem, Likatiut, and Tuchayalin, near downtown Petaluma, and Tulme and Susuli, just north of what are now the city limits of Petaluma.

The Petaluma area was part of a 66,000 acre (270-km²) 1834 Mexican land grant by Governor Jose Figueroa to Mariano Guadalupe Vallejo called Rancho Petaluma. In 1836, Vallejo ordered construction of his Rancho Petaluma Adobe a ranch house in Petaluma, which his family often used as a summer home, while he resided in the neighboring town of Sonoma. Vallejo's influence and Mexican control in the region began to decline after Vallejo's arrest during the Bear Flag Revolt in 1846.

Pioneers moved to Petaluma from the eastern United States after James Marshall found gold in the Sierra Nevada in 1848. The town's position on the Petaluma River in the heart of productive farmland was critical to its growth during the 19th and early 20th centuries. Sailing scows, such as the scow schooner Alma (1892), and steamers plied the river between Petaluma and San Francisco, carrying agricultural produce and raw materials to the burgeoning city of San Francisco during the California Gold Rush.

Petaluma soon became known for its grain milling and chicken processing industries, which continue to the present as a smaller fraction of its commerce. At one time, Petaluma was known as the "Egg Capital of the World," sparking such nicknames as "Chickaluma". Petaluma hosted the only known Poultry drugstore and is the place where the egg incubator was invented by Lyman Byce in 1879. Petaluma is also where Randall Smith founded Mesa/Boogie (also known as Mesa Engineering), which manufactures high quality guitar and bass guitar amplification.

One of the largest historic chicken processing plants still stands in the central area of town; this 1930s brick building is no longer used for the chicken industry, but is being evaluated for preservation and change of use. Even though it is no longer known as the Egg Capital of the World, Petaluma maintains a strong agricultural base today with dairy farms, olive groves, vineyards, and berry and vegetable farms.