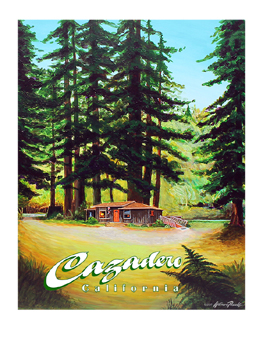 Cazadero is the general area from the confluence of Austin Creek and the Russian River at the intersection of California State Route 116 and Cazadero Highway running north to the small town of the same name. The town is approximately 6 miles from Route 116. Cazadero Highway parallels Austin Creek which is a principal tributary of the lower Russian River. Austin Creek flows southward from two major forks through the town to the Russian River. Just north of the town, Cazadero Highway is joined by Fort Ross Road which is a winding, narrow road that meanders west before reaching State Route 1 on the Pacific Ocean near an old fort established by the Russians after they claimed the area in the 19th century. Located in the Sonoma Coast AVA, Cazadero can also be considered part of Wine Country. Flowers, Fort Ross, Hirsch and Wild Hog Wineries have Cazadero addresses and all operate in the vicinity of the town. Cazadero is approximately 10 miles (16 km) from the Pacific Ocean, the Sonoma Coast and the mouth of the Russian River.

Cazadero was the northern terminus of the North Pacific Coast Railroad, originally laid as narrow-gauge track in the 1870s. This railhead was fed by several smaller-gauge systems dedicated to logging and networks of logging roads and trails which brought trees to Duncans Mill for processing and shipment south to San Francisco. Local legend holds that much of San Francisco was rebuilt after the disastrous April 1906 earthquake and fire using redwood and other lumber from the Cazadero area. Cazadero timbers are also known to have been used in pilings sunk to support the old eastern span of the San Francisco-Oakland Bay Bridge (which was replaced by a new span in 2013; the old eastern span was subsequently demolished.)