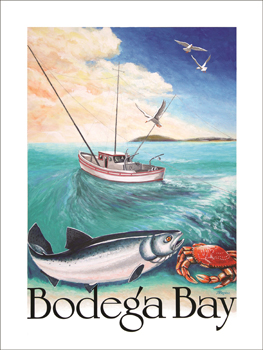 Harken back to a simpler FISHING time.  A Celebration of the Northern California coastal town of Bodega Bay and the Salmon & Crab fisherman of the area.

Bodega Bay is the site of the first Russian structures built in California, which were erected in 1809 by Commerce Counseller Ivan Alexandrovich Kuskov of the Russian-American Company in the lead-up to the establishment of Fort Ross. The Russians named the settlement in Bodega Bay Port Rumyantsev after the Russian Foreign Minister Nikolai Petrovich Rumyantsev, and it served as a port to support Fort Ross and the larger Russian community known as Colony Ross.

The town is now named in honor of Juan Francisco de la Bodega y Quadra, a Spanish naval officer who explored the west coast of North America as far north as Alaska during multiple voyages of discovery in the late 1700s.

The location scenes in the Alfred Hitchcock-directed film The Birds (1963) were filmed in both Bodega Bay and nearby Bodega (though both were represented as being parts of the movie's Bodega Bay.) The town markets itself by using the film in many ways, including its Birds-themed visitors' center, although none of the film's primary locations are found there. The church and schoolhouse shown in the film are located on Bodega Hwy in Bodega.

According to the United States Census Bureau, the CDP has a total area of 12.5 square miles (32 km2), 8.3 square miles (21 km2) of it is land, and 4.2 square miles (11 km2) of it (33.37%) is water. The town lies on the edge of Bodega Harbor. Bodega Bay itself extends north along the coast to Tomales Bay. North of town lies a long coastal exposure of alternating rock outcrops and sandy beaches which is known as Sonoma Coast State Beach.